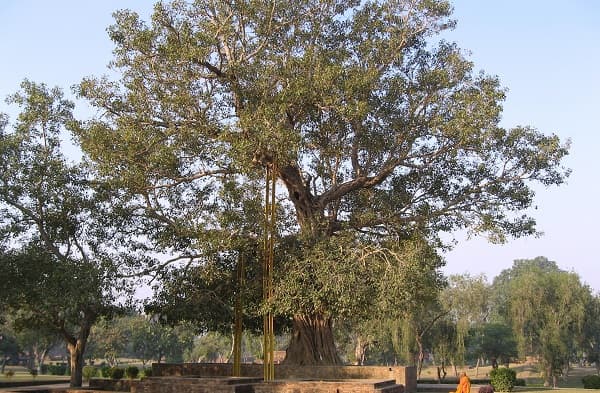 Buddhism is based on the philosophy around the preaching of Gautama Buddha about 2600+ years ago. Buddha was born as a prince and later became a monk in search of enlightenment. His entire life revolved around his abandoning his prince hood, meditating in forests, attaining enlightenment and preaching to his disciples. The areas where Buddha spent most of his life are now renowned Buddhist pilgrim sites visited by Buddhist travellers from all over the world. These Buddhist Holy Places are visited as part of a circuit known as “The Buddhist Circuit”.

Lumbinī (100 kms from Gorakhpur in India) is a Buddhist pilgrimage site in Nepal where Queen Mayadevi gave birth to Prince Siddhartha in 6th century BCE. Lumbinī is now a UNESCO world heritage site, comprising the main temple and gardens where Buddha is believed to have been born. There are also many other Buddhist temples here built by Buddhist countries from South East Asia.

Sarnath (12 kms from Varanasi) is where Buddha first preached Dhamma after attaining enlightenment. The Sarnath excavation site comprises stupas that contain original relics of Buddha. The Archaeology Museum next to the excavation site has the original scriptures, sculptures, artefacts and edifices and other ancient remains and is popularly visited alongwith the main excavation site.

Sravasti (174 kms from Lucknow) is where Buddha spent 25 of his rainy retreats (annual 3-month monastic retreat). The main attraction of Buddhist Holy Places, Sravasti is the Mahamongkol Chai Dhamma Temple complex that comprises a large meditation hall (3000 persons), a 100 ft Golden Buddha statue and 100 meter tall Stupa. The main excavation site is also home to a Bodhi tree, where prayers are offered. The tree is believed to have been grown from a sapling from the original Mahabodhi Tree at Bodhgaya.

Kushinagar – Where Buddha Breathed His Last

Kushinagar (40 kms from Gorakhpur) is where Buddha breathed last and attained Parinirvana. The main excavation site of this Buddhist Holy Places comprises a Buddhist temple (known as Parinirvana Temple) where a Buddha statue is placed in a reclining pose. Devotees also visit the cremation site of Buddha, which is now a large excavation site. There are a number of other Buddhist temples within 1 km radius of the Parinirvana Temple that are visited by pilgrims.

The Buddhist Holy Places destinations above can all be visited as part of a circuit popularly known as the Buddhist Circuit.

Join our newsletter and never miss the best deals
and great travel stories.

Let our travel experts plan out the best vacation within your budget.