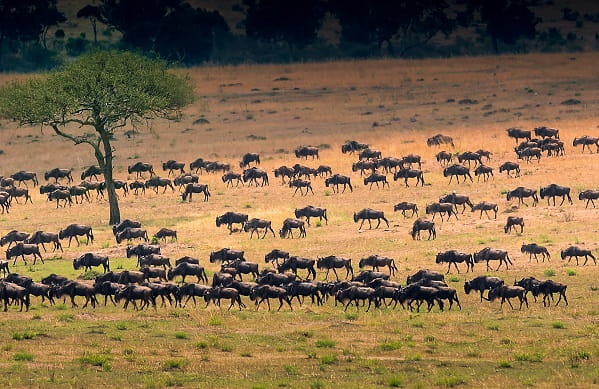 Tanzania, the East-African country,  best known for its epic wildlife tours and adventures, is home to the word- renowned Serengeti Migration, which is considered to be one of the greatest and spine-chilling events on the planet. This vast migration movement can be witnessed through the popular Serengeti National Park Safari.

One of the very first places that were added to the list of World Heritage Sites, Serengeti, is the home of wild animals such as lions, zebras, elands, gazelles and wildebeests. It is also home to more than 500 bird species and more than 50 mammals.

No doubt, Serengeti is known for its wildlife. But prominently, this region is famous for the great migration in Tanzania, popularly known as the Great Wildebeest Migration. The Great Migration is one of the Seven Natural Wonders of the World. We suggest you book a Serengeti tour package with us to witness this natural spectacle.

What is the Serengeti National Park Safari Migration?

The Serengeti offers a view of one of the greatest natural spectacles on earth - the migration of wildlife in huge numbers. Ecologically diverse and nuanced, it’s hard to beat the density and unparalleled numbers of animals that rove the vast plains of the Serengeti.

The largest terrestrial mammal movement on Earth, this migration stretches for about 1,000 kilometre, and crosses two countries, namely Kenya and Tanzania. As majestic as it sounds, the trek is not easy for the wildebeest and other animals since it is dotted with a large number of lions, tigers, leopard, cheetahs, etc. who await an opportunity like this one to go on a hunt drive at the time of this migration. If that’s not enough, then many participants of this migration, such as the wildebeest, gazelles and zebras among others in batches hundreds and thousands are seen crossing the Mara River, which is also full of crocodiles that are set to plunge on the animals as they pass through the River. Additionally, many lose their lives to infections and diseases they catch on the way. Let’s not forget the fact that thousands of them also die of starvation and fatigue. Overall, more than 25,000 participants of this migration lose their lives before reaching the final destination. Even so, this movement has been referred to as the ‘Greatest Show on Earth.’ One will have to witness the beauty of this movement to understand why it is referred so.

A game drive across the reserve is an amazing opportunity to get up close and personal with some of the most exquisite creatures the world has ever seen. The vast landscapes offer unique wildlife experiences with a view of the habitats and daily activities of the animals.

For those interested, the Great Migration occurs all year long. In other words, it’s a circular grazing path determined by the availability of food. It begins in January in Serengeti where zebras and wildebeests give birth and the grass is tall enough to keep the young ones hidden from predators. As the rains come to a stop, the herds begin movement following the river to the west heading toward Masai Mara in Kenya. When fall and winter strike, the herds make their way back to Serengeti chasing the rains. It’s a process that goes on all year long. However, in Serengeti, the best time to catch this spectacle would be October to May.

What makes thousands of wildebeest become a part of this movement?

Even though a lot of them lose their lives on this journey, yet these animals set themselves on this unique journey every year. Why and how they do it is still a mystery in the world of science, but there are some theories that make sense and thus, are elaborated below.

According to naturalists, the direction of the journey is decided as per the growth of new grass. The high levels of phosphorous and nitrogen invite the animals to follow this path. As per other experts, wildebeest can locate rain from a distance of minimum 50 km and thus, react to thunder and lightening that takes place, and move towards the same direction as other animals join them as well. Thus, it can be said that the movement is highly predicted by the weather of the region.

The fossil evidence also suggests that the migrations can also be based on pure instincts since wildebeest are known for roaming in the African plains from time immemorial. Whatever might be the reason, this movement is phenomenal in every sense of the word and people can’t help but book safari options at the Serengeti National Park every year. Yes, witnessing this marvellous event should definitely be on your bucket list!

When is the best time to visit Serengeti to witness this?

Timing is everything to witness this migration. Unfortunately, there is no way to predict this trek. The migration completely depends on the rain pattern that triggers the wild to move toward green pastures. However, as mentioned earlier, this is a yearlong occurrence but in Serengeti, the best time would be from October until May.

Let’s learn about the migration month-by-month, starting from January, February and March. The Great Migration, in the month of January finishes on southward trek and moves on the eastern side of the Serengeti, towards the Ngorongoro Conservation Area. This is usually the birthing season for wildebeest as the plain grow rich in nutritious grass.

Between February and March, more than 40,000 calves are born in the area. This also makes this area vulnerable to the visit of tigers, leopards, and lions since it is an opportunity for them to hunt. So, those of you who want to witness the calving and high-key hunting season can book the safari during this time.

In the beginning of April, the herd moves towards the region of Central Serengeti, where thousands of zebras, antelopes and other wild animals join the movement. By the end of April, animal grazing becomes quite a sight for the travellers. By the beginning of May, mating seasons begins, however, the journey continues amid all this, towards the western corridor followed by the crossing of Grumeti River, which might not be as epic as the great Maha River crossing but even here many crocodiles enjoy feasting of those who couldn’t cross the river in organized herds.

From June to July, the movement continues toward North along the western edge of the Park. The highlight of this season is the crossing of the Mara River in the North of Serengeti. Infested with crocodiles, this River sets the bar high for the wildebeest, zebra and other animals who participate in the event. Hands down, this is one of the most adventurous events of not only the migration, but the planet, or so people reckon. No prizes for guessing, if you are brave at heart, then this is the best time to book your safari. By the end of July, the animals almost make it through the crossing.

By August, the herd spreads across the Masai Mara’s northern region, also known as Northern Serengeti. A huge loss of life takes place during this period due to high flow of the rivers and thus, predators wait for every moment to get their clutches on the participants of the movement.

From September to October, the animals move towards the eastern side but have to cross the Mara River again and survive the brutal attack of crocodiles, once again.

By the end of November, the herds have already moved past the Namiri Plains in the Eastern Serengeti. Namiri Plains are popular for Cheetah sightings and thus, hold danger for the wild animals as well. As December closes, the participants are already spread across the eastern and southern sides of Serengeti and the area is lush with grass and fresh rainfall.

Safari options and things to do

There are numerous Serengeti National Park safari options available all year round to witness this magnificent event. Holxo has picked the best for you to experience this once-in-a-lifetime event.

Apart from witnessing this event, there are also other places to visit in Tanzania such as Ngorongoro Crater, Lake Manyara National Park and Olduvai Gorge which will leave you awestruck.

Do not miss your chance

Witnessing this phenomenal event is worth it, even if you aren’t a wildlife enthusiast. The Great Wildebeest Migration in Serengeti National Park Safari of Tanzania is indeed a sight to behold! So, don’t waste a second and book your Safari today!

A Week in Tanzania

Join our newsletter and never miss the best deals
and great travel stories.

Let our travel experts plan out the best vacation within your budget.